Getting to Daleen & James wedding meant waking up before the sun rose, but it also meant I got to go on an adventure. We were going to Glencoe, Dundee!

We (my second shooter, Aimy, and I) drove through some seriously beautiful parts of SA. All of it made extra pretty with the early morning light. All of it a bit daunting with pot holes big enough to swallow my car.

The bride and groom were getting ready on the farm (they are both farmers), and it had rained, or maybe poured, the night before. I thought my morning of extreme pothole dodging was going to be my most exciting driving experience for the day. Oh my was I was wrong!

First stop was checking in with the bride. I had direction to get to the farm, but that was it. So I got to the farm (on very wet slippery mud roads) and then the farm drive way split into three. I choose the wrong one and ended up at the dairy. The mud here was next level, and it wasn’t getting any better. I knew I had to turn around but didn’t want to stop in case I got stuck. (Do you even get stuck if you stop in mud?). So we kept going, past the dairy, past a calf, and then finally past a bunch of workers watching us with what looked like curiosity, amusement and a bit of confusion. Thankfully, they were helpful enough to shout out directions to get us to the main house though.

Daleen was calm as a cucumber and her as her bridesmaids were getting their hair done. There was still plenty time before the wedding. So we headed on over to the other farm where James was getting ready so I could drop off Aimy and check where the reception was being held.

I thought the mud at the dairy was bad. This mud was so much worse! We turned into the driveway of the second farm and suddenly we were sliding. Again, I didn’t want to stop incase I got stuck. (I really should find out if that is a thing). So kept going, and we kept sliding. The drive way is lined with trees and while we never did actually get too close to any of them, I kept worrying I would crash into one and injure myself to the point where I couldn’t capture all of Daleen & James’s special moments.

At some point Aimy and I started shrieking (while also laughing) as the car suddenly started sliding again. I looked up to see another car pulled over to the side, but facing me with two guys in it, looking on in absolute amusement. It was actually a very short road and we got to the farm house quickly. We parked, and Aimy and I looked at each other, both with huge grins, and both agreed that that was super fun! 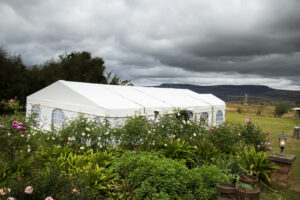 With the tent still busy getting decorated for the reception and the guys only just starting to get ready, I headed off back to Daleen. 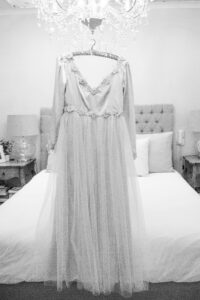 Daleen and her bridesmaids were so calm the entire time while getting ready. It was only after Daleen got into her dress and I started taking a few portraits that I felt their excitement start to build.

I headed off to the church ahead of Daleen and the bridal party and when I got to the church it was evident that James was nervous – and excited!

The ceremony was extra special as James’s dad was the pastor. Actually, this whole wedding was extra special. Daleen’s mom made her dress, and her maid of honor did her make up! And of course they got ready and had their reception on the farms that they live and work on!

Once the ceremony was over and congratulations had been said, we rushed back to the farm. We were losing light and I still had loads of natural light shots I wanted!

We finished up with the group shot and flew through family photos. Then the real fun started! Bridal party & couple portraits.

James had told me as we were leaving the church that he wanted pictures with cows. And there is no way I would ever say no to pictures that have cows in them. Only problem was, the cows were back on the other farm, and that beautiful sun was setting.


I grabbed a few more very quick portraits and then it was seriously time to mission.

We were rushing up past the sheep pen when James looked back and asked if we wanted to take my car or his. My first reaction was to take mine. That way we would all stay clean, warm and camera equipment would be safer. But then I remembered my crawl pace up and down the muddy roads. We ended up taking James car. James and Daleen in front. Aimy, Daryll all the camera equipment and I on the back. Let’s just put it this way, we got to some stunning long grass and the cows long before I would have. And I also learnt, if you go fast enough you don’t slide in mud (or maybe you just don’t feel it).  Farmers drive fast!

At some point as we were leaving Daryll, James’s best man brought Daleen & James some drinks, and when he saw us leaving decided he would tag along as the drink holder. The guy ended up doing way more than just holding drinks. Some of his duties included herding cows, protecting camera gear from cows, driving cars, lugging cameras and camera gear, holding flashes, and opening and closing farm gates as we missioned about. All while still holding Daleen & James’s drinks! He was a huge help and saved us loads of time. Thanks for your help Daryll!

We got to this field and all the cows scattered.  I started posing Daleen & James to make sure I could get the cows that were in the distance in the background of the shot. I took a few shots and next thing we were surrounded by cows. They were everywhere and very interested in what was going on. A short while later when I was about to start using my flash I got ready for a shot of them scattering as soon as the flash triggered, but the cows weren’t even afraid. In fact, I think they became more intrigued! I so could have just spent the whole night in that field taking pictures of Daleen, James and all the cows! 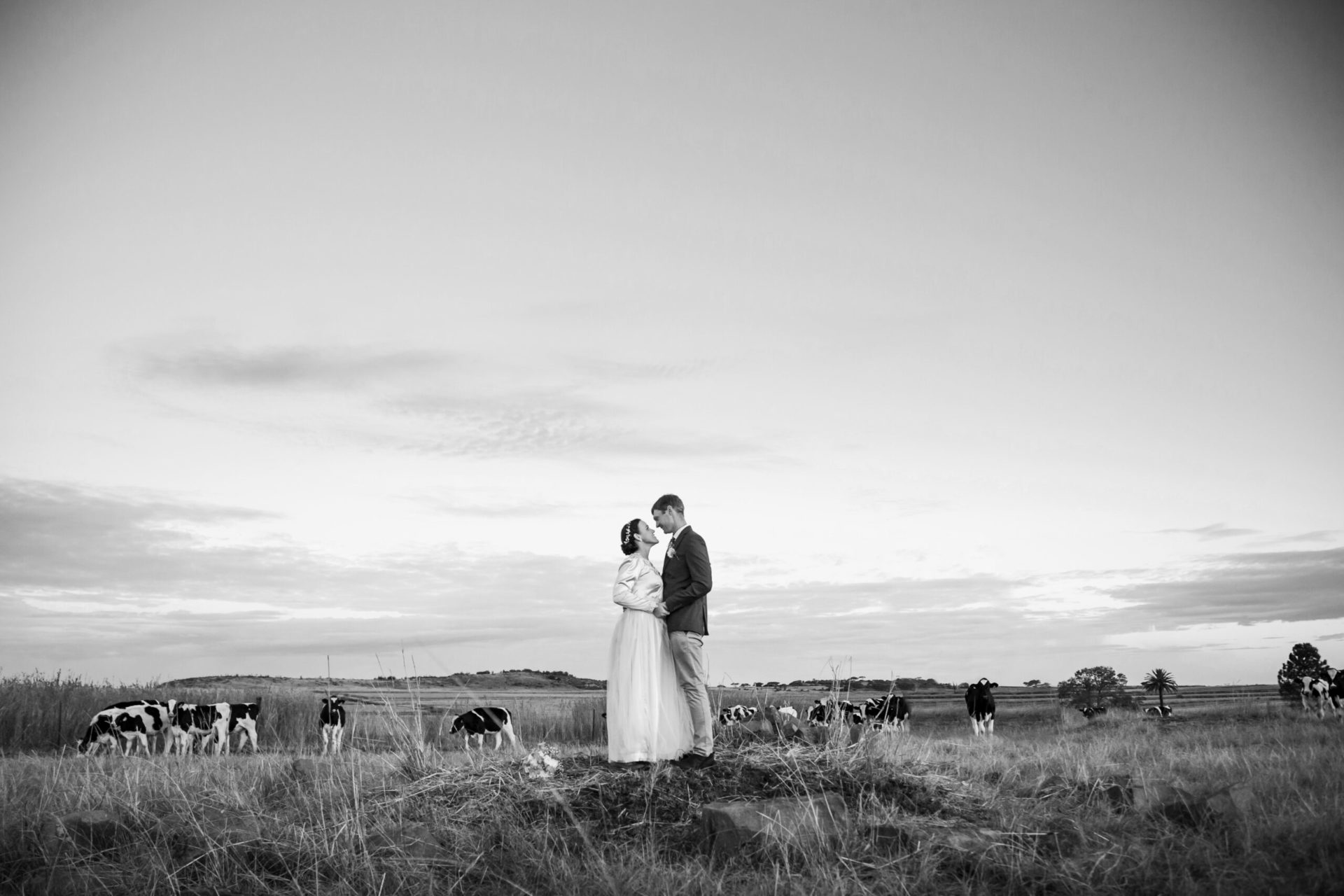 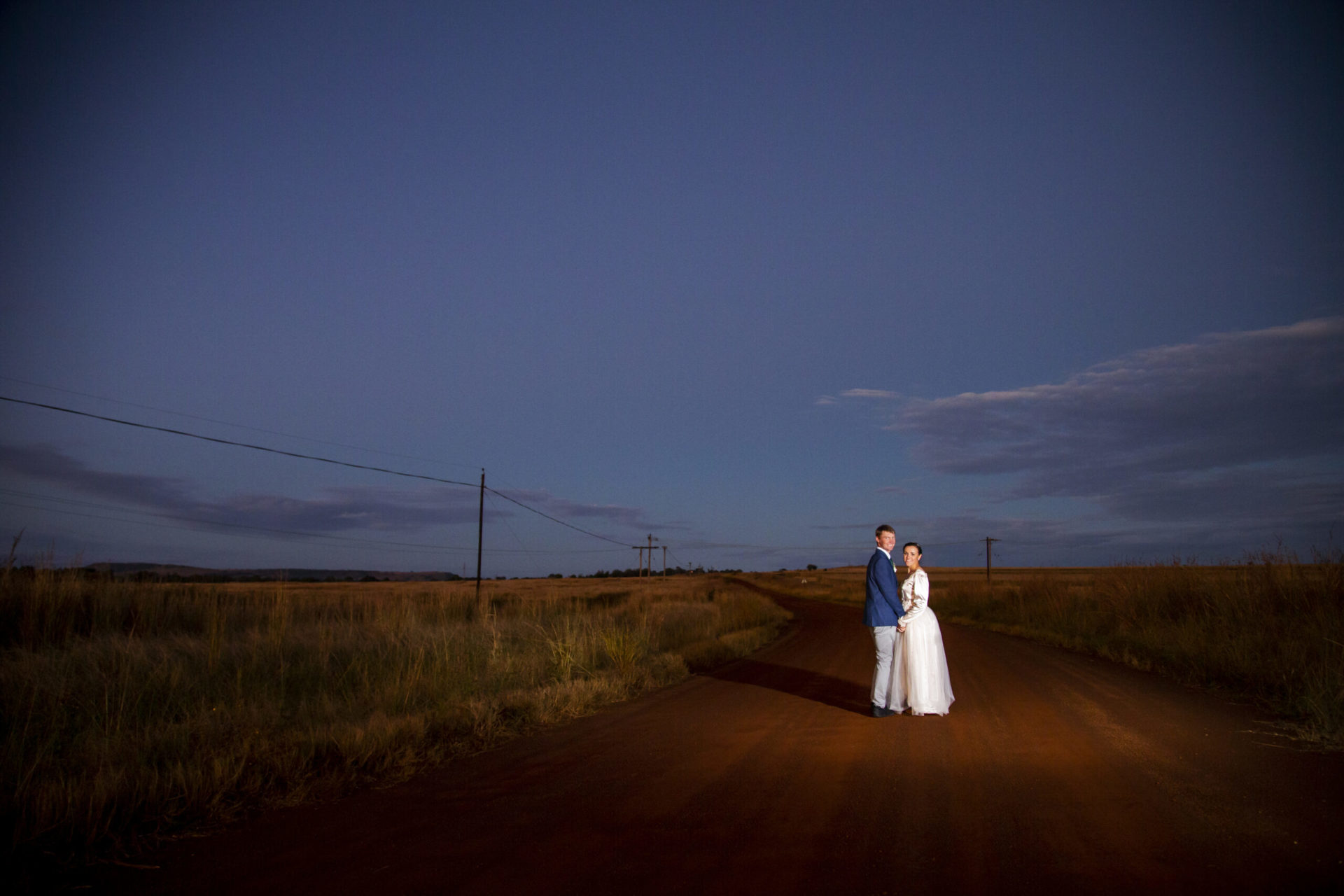