I had been talking about doing a couples portrait shoot for ages with Michaela & Graeme and their horses. Somehow we just never seemed to get the timing right. However, it all eventually worked out for the best. They had just moved onto their new farm along with their horses and so we got to do the shoot on their own property. 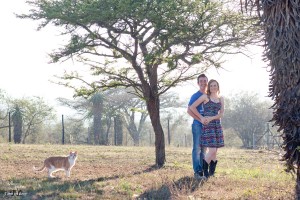 This cat seemed to also like the idea of having the shoot on the property. The poor little thing tried to follow us everywhere. After the poor thing got a thorn in its foot they decided to take it back up to the stables and try keep it there.

Anything to get the shot

Here again I realise just how much I put my clients through. If you had to ask me a few weeks back how often I put clients up trees I’d probably reply that I’ve only ever done it once or twice. But just over the last few days of blogging I have already had two couples in trees. I really must learn to torture my clients less.

The properly these guys live on borders onto a game park. So when we saw some zebra grazing in their bottom paddock we decided to head off in that direction so we could try get some epic shots. Unfortunately as much as we walked towards them, they would walk away from us. Eventually we decided we would slowly move in their direction, stopping and shooting along the way. This way they would not be too afraid of us and we would hopefully get close to them. We got about halfway across the paddock with them still in it and relatively close by when we stopped to take some photos. We were close enough to them to get some shots. But I thought it was safer to shoot a bit first before I turned and pointed a camera at them and stated posing people in front of them. So we did one or two shots and just as I was taking the last shot and about to direct them to move so the zebra could be part of the photos, something scared them and they took off.

Including their horses in the shoot

Having grown up around horses, I have always somehow been involved with horses. Generally, I would consider myself to know quite a bit about them. But then I met these horses. Now, I understand that you can train a horse. Our horse used to stand while we went to fetch a saddle. He would also follow us around if we walked in front of him. He knew my dad was the carrot man and he should always look for carrots with him first. And of course he was trained to be ridden, jumped etc. It never really crossed my mind that you could training a horse beyond that. I remember once when I was very very very small my gran went to visit one of her friends and she had horses who she told me could dance. I remember the music and the paddocks, but I don’t actually remember seeing dancing horses. Maybe they did dance and I just can’t remember, but I have always just dismissed the thought. And thought she must have been a batty old lady whose horses never could have possibly known to dance.

These horses made me reconsider. These horses do amazing stuff! Micaela rides her horse bare back with no bridal and it still does what she wants. That’s impressive, but still semi understandable. But then you see her jump off, set up a jump, point to the jump and tell her horse to go jump it. I shouldn’t say this or be this mean, but I laughed the first time I saw her do it. I thought she was slightly looney to actually expect the horse to listen to her. Or even understand her. Then her horse went and jumped the jump! They once went on an outride and came across a fallen tree or a cross country jump or something. Micaela was a bit nervous about jumping it, so she hoped off, told her horse to jump it, and when she saw her horse could easily do it, she hoped back on and together they jumped the jump. Greame can get his horse to gallop at him flat out and then skid to a stop just in front of him. Incredible stuff! 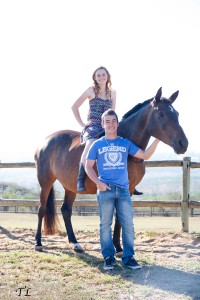