Caity was back again! I had just seen her in the morning to photograph her dogs. And now it was her and her boyfriends turn. I already knew Caity would be amazing in front of the camera, she loves photos and is one of the easiest people ever to photograph. Neill I was slightly concerned about. Guys generally tend to not enjoy this stuff so much. Caity had already told me he would be brilliant in front of the camera though and would probably quite enjoy it. I didn’t really believe her. Experience told me she would probably be wrong. I was wrong. He was brilliant! And the two of them together were just amazing!

We started off pretty chilled with more normal poses. In normal places. But when I started to realise that these two were game for anything the abuse started. (Jokes)! We started off just around this one huge magnificent tree. With gorgeous purple flowers. But then I thought it would be even more epic if I  just made them stand right in it! And they had all these flowers wrapped around them. (No wonder Johannesburg Botanical Gardens now charges photographers to shoot there).

And then there was a tree. A beautiful, epically amazing tree. When I asked them if they would sit in it for the photos I really never ever thought they would ever do it. But, this was Caity, so it was worth trying. There was some slight hesitation, and I’m not sure they thought I was serious at first, but they soon agreed! 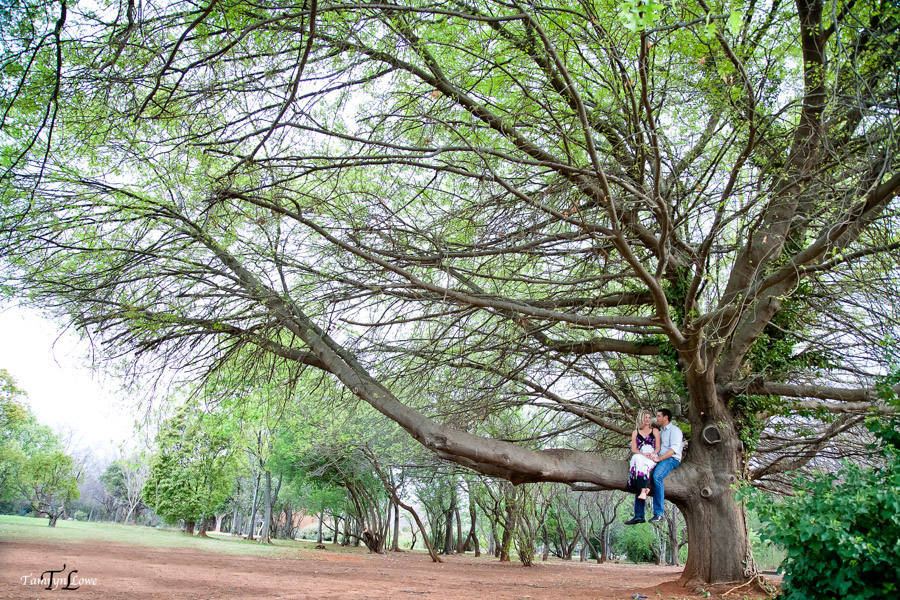 Caity had brought along some bubbles to play with for the shoot, but we hadn’t really gotten round to using them. so the shoot was pretty much done when they decided to just play. Apparently blowing bubbles isn’t the easiest thing, and soon it became a bit of a game as to who could blow the most bubbles.