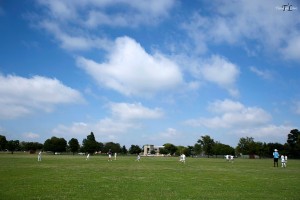 Haha! The main thing I remember about this was getting lost on a train. And I’m not even sure that it was the same visit. But I’ll tell you the story anyway.

It was while I was still staying at my aunts and clearly my other cousins thought the idea of having a new family member in town was quite exciting (the novelty seems to have worn off) so it was decided that I would go spend a weekend at their house which was about an hour and a half away from my aunts where I was living. Now, if you are not South African, or African, our public transport systems aren’t the greatest and most reliable and in general (I feel like a bit of a snob now) but if you are well off enough you rather use your own car or get a lift with someone who has a car. Public transport really isn’t even something I consider. But Joburg had recently invested in Gautrain. This is a reliable train that is super fast and is actually reliable and safe to use. So we decided that my aunt could drop me off at the Gautrain station close to her work and then I would meet my Aunt at the station by their house. This would save a lot of money and a lot of time traveling. Only problem is Tamryn doesn’t have the best concentration when I have too much excitement to concentrate enough. So I hope on the train and have been told that there is one stop where I will have to get off and change trains. But I just got told this information and then we were running late or something, but I remember rushing through the station trying to carry my super heavy camera bag, mu laptop bag and then a huge bag of clothes. (I think I was going to Durban straight from my Aunt and Uncles, because the bag I remember was huge).  Luckily enough I met a very sweet guy who decided he would help me carry. This is South Africa and we don’t trust anyone, so he got given the clothes bag to help with while I hung onto my camera and laptop bag. And it was quite exciting, here I was going on a train for the first time, it was my first time missioning alone in Johannesburg and now I have a cute sweet guy helping me out! So poof concentration on important matters gone. So some time over the trip he asked me where I was headed… I couldn’t remember!! So he started listing some of the stations. So there is a Hatfield station and there is a Rhodesfield station. So clearly something stuck and when he said Hatfield I was like “Yes! That’s it!!’ but this was without realising that there were two stations that had “field” on the end. So off we go. Somehow the fact that the station I was supposed to be going to was near the airport came up… And thats when we realised I was on the wrong train headed in the wrong direction!! And it was about this time I realised there were two stations with “field” on the end. So this more sweet amazing guy helps me, first by calming me down because now I’m lost in Johannesburg and really have no clue where I am and only 90% sure the stain I’m now headed for is the right one. But we manage to get to the right stain and this poor guy has now spent the last like hour trying to get me on the right train, and as we get to Rhodesfield the train he needs to get to wherever he was going arrives. So off he goes. As his train left I realised I hadn’t even remembered his name and this poor guy and spent ages helping this crazy lost kid on a train. So hopefully he one day somehow reads this so he can know how grateful I am for his help! I think if I had walked out at Hatfield and realised I was at the wrong place I would have ended up just sitting down and crying my eyes out – Joburg is a lot to deal with when you don’t know the place at all.

But I eventually arrived at he right place and went out to find my aunt waiting, SHO, what a relief! And we spent the rest of the weekend a lot more peacefully, watching my cousin play cricket, watching both of my cousins have a chess lesson (not really my thing), playing Sims! (totally my thing!!) and chilling and having a good time 🙂 🙂