I lived in Joburg for the first 10 years of my life and then we moved to KZN. We had a flat in Durban that we went to almost every holiday except for when we had or timeshare holidays in the Drakensburg. Somehow we always used to have the conversation of where we wanted to move to one day. I always said the sea and my sister always said the Drakensburg. I think my sister might have been sightly irritated when we first moved to Durban, because in a way I got to move to my dream place. It was in no way my choice to move and me wanting to live there had nothing to do with why we did end up there, but I still think my sister used to hold a bit of a grudge.

I absolutely loved my life in KZN. I don’t remember ever missing Joburg or anything to do with Joburg. But as I got older I started to realise the draw backs of our little town. Besides the usual stupid stuff like small town gossip and so on there was more missing. Maybe it’s a small town thing, but I find Scottburgh has no drive and ambition to be greater. That must have been the biggest thing that worried me. Everyone was happy with just staying where they were and being good at what they did, but only within the town. My “thing” in high school was mainly hockey. I loved it!! I wanted to be great. I started playing for the adults club team when I was still in primary school and carried on playing for them until it faded away while I was still in high school. Everyone who was on the team sort of just accepted that there was no longer hockey and so they would no longer play. I find that odd. I ended up going into Durban to play and continued playing my way up the ranks in some of the best teams KZN had. I still don’t understand how every one else just accepted that there was no more hockey and so they stopped. I took the opportunity to push harder and be better. All it took was a little drive.

Ok so that went a bit off point, but back on topic – the beach and the coast is where I always wanted to be. So when I ended up moving to Joburg I think it was a big shock to my family. I was the one they counted on to always stay on the coast. And yes I miss waking up and lying in bed watching paddlers go out, whales splashing on the horizons, dolphins in the waves and watching the dive boats waiting for divers over the shoal. But surprisingly I love this view too. Yes its built up and very urbanised, but its a place where stuff happens. There are people all around who have a ridiculous dream, but they are driven enough to put together a business or to put in the effort to work towards it. This is a place where stuff happens! This is a view of people who have drive and ambition in life! 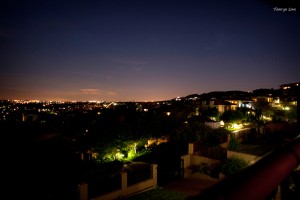